I am currently employed at CMRE (ex-NURC). At CMRE I work mainly as an engineer but I did some applied science as well.

The engineering work consisted on  different tasks such as: coding a simulator in C++ for the Folaga hybrid AUV, coding a graphical interface in Qt for one of the AUVs, coding acoustic modem driver, implementing range measurements using Evologics acoustic modem running on MOOS (Mission Oriented Operating Suite)  middle-ware.

The applied science consist on robust LBL (Long Base Line) localization using interval methods. The program was written in C++ and integrated into the ROS middle-ware as a localization node. When I was employed at ENSTA-Bretagne as a research engineer. I worked on a specific type of underwater robot called “Glider” which principle is explained in wikipedia-glider . The purpose is to set up a navigation algorithm of the glider in a constellation of drifting acoustic beacon under the polar cape.  We choose to let it navigate around only one acoustic beacon in a circular motion 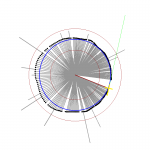 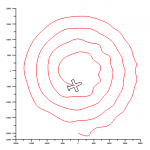 More details :  We present a simple yet robust sea-glider navigation method in a constellation of drifting Lagrangian drifters under the polar ice cape. The glider has to perform oceanographic measurements; mainly conductivity, temperature and depth, in an area enclosed by the drifters. The glider can not rely on GNSS positioning data as the ice cape makes it impossible to surface. The presented method does not use a localization algorithm to estimate state space model data. The originality of the presented method resides in the use of only one acoustic beacon and a very simple PID controller based on a basic kinematic model. Interval analysis is used to bound the errors in the estimation of the measured value and its derivative in the presence of noise and outliers. Validation is performed through intensive simulations.